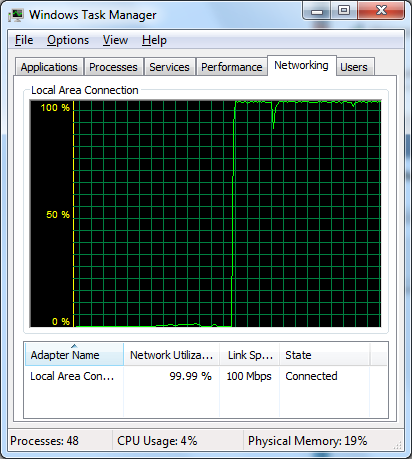 I have finally achieved my goal of network saturation on my home network.
As with most people, I have a small off-the-shelf router that does the standard 100 Mbs. Most of the computers in my house are hardwired because the wireless signal is slower and weaker in the far corners of the house and also because we bought a spec home that had all the rooms pre-wired with Ethernet.
In the past, when I've been copying files from one computer to another and I've looked at the transfer rate over the network I've been disappointed that only 40% to 60% of the available bandwidth was being utilized. The hardware supports 100 MBS so why isn't it transferring data at that rate dammit?
The reason is because of the slowest component in the chain which has always been the hard disk speed. Well not anymore. I've just bought myself a new computer and with this I got a Patriot Torqx PFZ128GS25SSDR 2.5" Internal Solid state disk (SSD)

which promises 260 MBS read and 160 MBS write.
The computer that I was copying from had the data sitting on a Seagate Barracuda LP 1.5TB 3.5" SATA 3.0Gb/s Hard Drive -Bare Drive

. I don't know what the read speed of that is (yet - I'll come back and update this later) but I'm guessing that it's over 100 MBS or I wouldn't have achieved network saturation.
Is it going to be worth getting a faster router? Not yet I think. The times I'll be copying between computers with fast hard drives is probably going to be rare. I'll wait until my internet connection exceeds 100 MBS. My prediction is that will happen in about 7 years time.
Posted by Guy Ellis at 12:54 PM